Is wearing a full face of makeup the same as catfishing? Woman sparks debate after revealing her friends have NEVER shown their boyfriends what they really look like

By Latoya Gayle For Mailonline

A woman who admits she looks unrecognisable without make-up has sparked a heated debate over whether wearing heavy cosmetics is a form of catfishing.

Posting anonymously on Mumsnet, the woman, who lives in the UK, explained she receives more attention from men when she’s wearing make-up than when she goes without any products on her face.

She said many of her friends have boyfriends who’ve never seen them without make-up, suggesting they have feelings for someone who looks entirely different bare-faced.

Many responses argued make-up shouldn’t be considered a form of catfishing because it isn’t as deceptive as using old or edited photographs, however others agreed it can give an entirely different appearance. 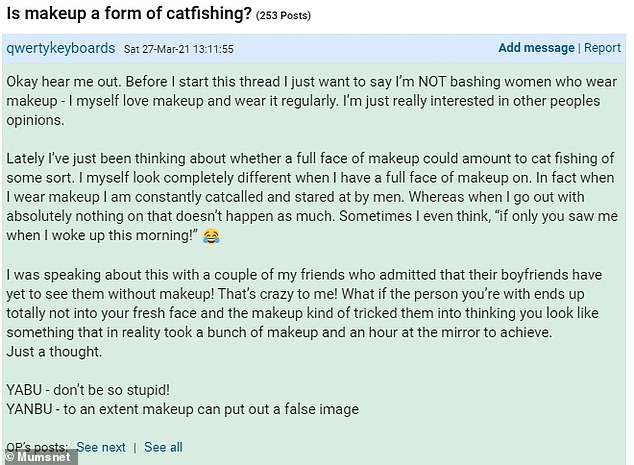 Posting on Mumsnet, the woman explained she has friends who have never let their boyfriends see them without makeup

Asking for opinions, the woman wrote: ‘Okay hear me out. Before I start this thread I just want to say I’m NOT bashing women who wear make-up – I myself love make-up and wear it regularly. I’m just really interested in other people’s opinions.

‘Lately I’ve just been thinking about whether a full face of make-up could amount to catfishing of some sort. I myself look completely different when I have a full face of make-up on. In fact when I wear make-up I am constantly catcalled and stared at by men. Whereas when I go out with absolutely nothing on that doesn’t happen as much. Sometimes I even think, “If only you saw me when I woke up this morning!”

‘I was speaking about this with a couple of my friends who admitted that their boyfriends have yet to see them without make-up! That’s crazy to me! What if the person you’re with ends up totally not into your fresh face and the make-up kind of tricked them into thinking you look like something that in reality took a bunch of make-up and an hour at the mirror to achieve?’

‘Just a thought. YABU – don’t be so stupid! YANBU – to an extent make-up can put out a false image.’

A flood of responses said wearing heavy cosmetics should be considered a type of catfishing, with some admitting they’ve had professional make-up artists completely alter their appearance.

One person wrote: ‘I think make-up can be very deceiving! Some women genuinely look completely different with and without, which I guess seems like a form of catfishing like you said. It can completely change someone’s skin tone and texture for example and how their bone structure looks etc. It can be dishonest and I wouldn’t be surprised if lots of people weren’t attracted to someone’s natural face if they’re used to seeing them with lots of make-up on.’

Another said: ‘I get what you mean OP. When I had my make-up done by a professional make-up artist for a wedding I honestly felt like I was wearing a Snapchat filter. Honestly this woman was a genius and even though I wear make-up every day this was another level and I’ve never looked as good since.

‘I’ve seen some crazy transformations with make-up and in a way I agree with you.’

However, others argued make-up shouldn’t be considered a type of catfishing because it doesn’t change appearances as much as using someone else’s photographs.

‘Catfishing is the wrong word. A full face of make-up, for example in your old photos is the equivalent of the bald man who wears a hat in all his or always a full beard to cover a weak jaw/chin,’ one person wrote.

Another remarked: ‘I mean, people can look dramatically different without make-up. But it’s usually obvious they are wearing it, not like using a fake photo or persona to literally trick someone into believing you’re someone you’re not.’

A third added: ‘Make-up enhances the features you already have so I would YABU. If someone is wearing enough make-up to look dramatically different you’d definitely be able to tell.’